As many of you know, my father (John Champion) died in June this year as a result of an aggressive lymphoma which started in his tonsils and despite a course of chemotherapy quickly spread to other parts of his body.  John had been an active member of the SCKPA for over 20 years (including 10 years as Chairman), following his diagnosis of polycystic kidney disease, subsequent renal failure, two years of haemodialysis and a kidney transplant (donated to him by his sister Liz Pullinger).  The fact that John died from cancer and not by his renal disease or any problem with his donated kidney is a marvel of the clinical research and healthcare that has been available in support of kidney patients.

At John’s thanksgiving service in August, I was delighted to see and talk to so many members and supporters of the SCKPA.  Martin Wood’s tribute to John was moving not only for the way that John was remembered and for the appreciation that the SCKPA had for his work, but also in that I was unaware of some of the wonderful things that John and Bobbie (my mother) were doing for the charity.

I entered the Auckland Marathon around the time of my father’s death and it was in August, listening to John’s tributes in St John the Baptist Church in Little Marlow that I decided to run in memory of John and in support of the SCKPA.  None of the training or the running of the Auckland Marathon itself comes close to the dedication and excellent work carried out by the SCKPA’s volunteers, supporters and renal medical experts.

The Auckland Marathon was held on Sunday 20th October and unlike many of the more famous marathons (London, Boston, New York) is a much smaller affair without the scrummaging at the start of the race before the pack thins out and everyone finds their comfortable pace.  It was an early start with us setting off in darkness at 6am in Devonport on the North Shore of Auckland Harbour.  The first 15km took us through the undulating streets of the North Shore, a peaceful run at that time of day.  Then came the long steady climb over the magnificent Harbour Bridge with spectacular views of Auckland’s main harbour, the city, the container port and the distant bays which make up the second half of the marathon.  I was still feeling fresh coming through the City at the half way point and managed to look cheerful and wave to my family as I ran past them at 25km, close to our home.  All that remained was the 17km slog out to the beautiful bays East of Auckland itself (and back).  This should have felt easier as I had done most of my training along this stretch, knew every landmark and could almost count the number of steps between them.  Indeed reaching the turn-round point in St Heliers Bay also seemed reasonably straight forward, but the last 8km into the City was tough.  I kept plugging away whilst watching my speed dropping with every kilometre, doing calculations about what it meant for a projected finish time.  I had two times in mind, the elusive 4 hours and the challenge set by my cousin of a slightly random 4:13:30 as a target.  These times and the thought of running for my Dad spurred me on and while I didn’t kick back into top gear, I managed to find the energy to steady my pace a little.  I finished with a time of 4:07:45, went to find my bag and collapsed onto the grass in Victoria Park with cramp and pins and needles throughout my legs for about 40 minutes, before getting up, stretching a little and grabbing some food and a beer.

Most importantly, with everyone’s support £2,000 plus £413 in gift aid has been raised for the SCKPA.  I’d like to thank everyone at the SCKPA for their sponsorship for this event, for the kind words when Dad died, for Martin’s enlightening and generous tribute at the church and for everything that the volunteers do to support kidney patients with living with their disease. 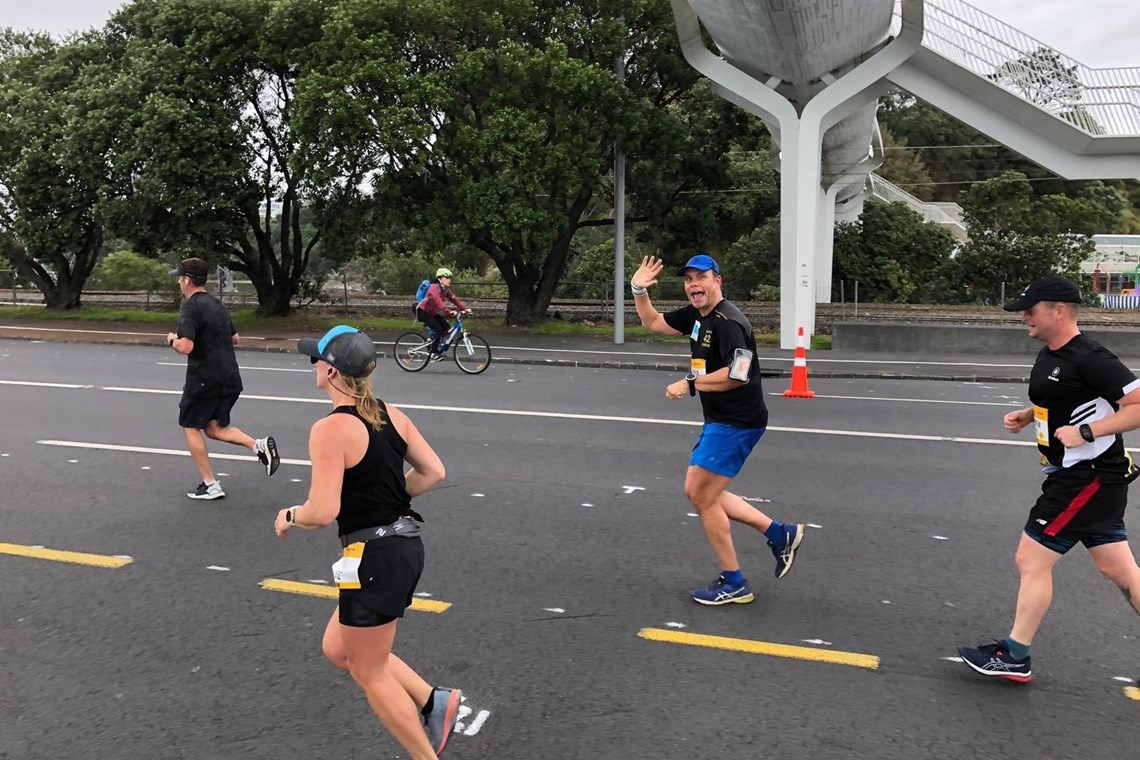 Charlie while still able to wave! 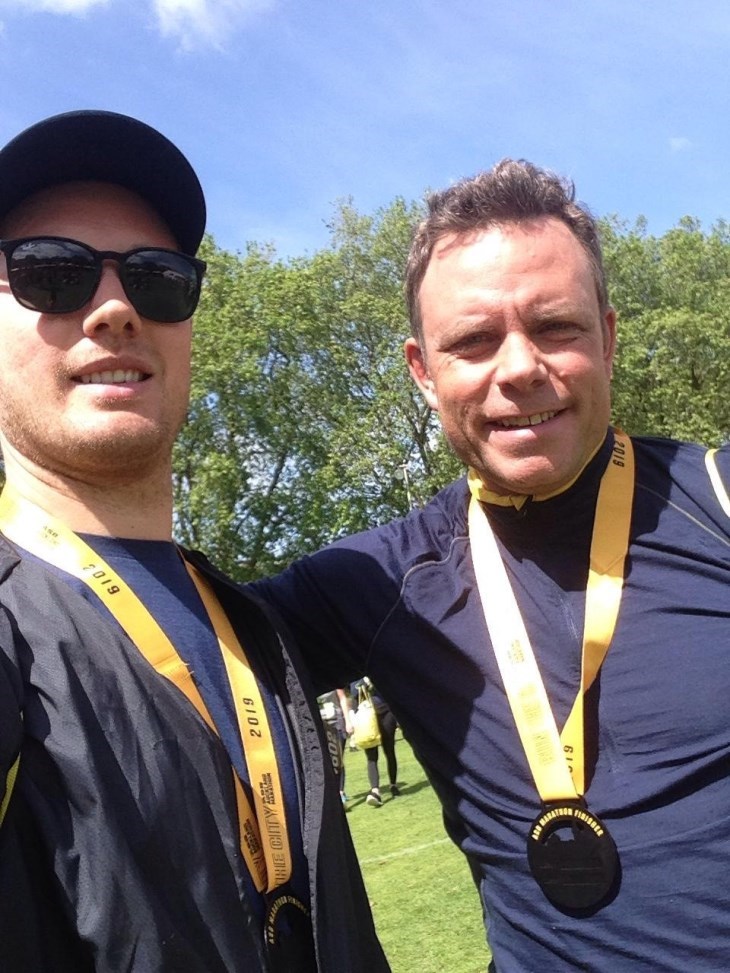 Charlie with his running mate plus medals