John Champion stands down as Chairman of the SCKPA

At the AGM held on 17th September 2017 John Champion stood down as Chairman of the SCKPA. In recognition of his commitment on behalf of us all,  a motion was passed unanimously to elect John as Chairman Emeritus of the SCKPA.

"Today marks the end of an era for the SCKPA. John has been our Chairman since most of us had short trousers and pigtails. But we mustn’t be sad. This is not goodbye. We hope John will still have some sort of involvement as you will hear later. And I think we can expect to see him at future meetings.  Now is the chance for us to show our appreciation for all the work John has done not only for the SCKPA, but for all kidney patients in our area, during his time as Chairman. 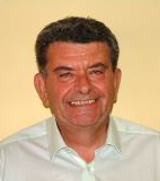 Some of you may remember one of our meetings last year when John was celebrating a special birthday and I stood up to say some words to mark that occasion. At that time, I said John was Mr SCKPA and that is exactly how most of us think of John. He has been the backbone of our Association for the last ten years.

Today is our opportunity to say a heartfelt thank you to John and to show our appreciation for all he has done on our behalf.

So where should I start? I had a real problem with that. After all, who keeps a list of what they do? Well actually John does. Being ever helpful, John sent me an email a little while ago saying something along the lines of “Please see the attached. It’s a list of stuff you will need to attend to.” There are well over fifty things on this list, including such things as “Prepare the flyers before each meeting”, “Write the Chairman’s report” and  “Deal with phone calls from members and non-members”.

It was at this point that I began to feel rather sorry for the person stepping into John’s shoes (i.e. me!). Then I got a really big sinking feeling when I realized that none of the big, important stuff was on this list. Stuff like the never ending battle for a new renal ward.

Did you know that over the last 6 or 7 years, John has written dozens, literally dozens of hard-hitting letters and emails to just about every executive on the OUH Management Board, including the Chair, two Chief Executives, the Finance and Operations Directors and the Chair of the Governors. There have also been letters to the Care Quality Commission, to MPs and to anyone else who could possibly help the cause. Over the same period, John has attended loads of meetings every year with the key people at the JR and at the Churchill to try to get things moving.

I know it has been John’s biggest disappointment that despite the overwhelming case he has presented and despite many promises from the hospital executive we still do not have a definite promise to proceed. However, John, being the person he is, he has not given up. He has agreed to continue to work with me to get the new Renal Ward done. In fact, we have a meeting tomorrow morning at the John Radcliffe and a meeting tomorrow afternoon at the Churchill.

The renal ward isn’t the only campaign John has waged on behalf of patients. I think it was 18 months ago that the Bucks Hospitals had the great idea of making dialysis patients pay for their parking. John got on the case with a very strong and well-argued letter to the Chief Executive, and when he didn’t get an answer he threatened to lay siege to the Chief Executive’s office. It was at this point that Bucks Hospitals had second thoughts and decided to drop the idea flat. Thinking of the car park fees our dialysis patients have saved as a result, I think John deserves huge thanks for that alone.

Then there are the radio broadcasts. Did you know John was a star of local radio? He has made guest appearances on Marlow Radio and on Swindon Radio promoting the SCKPA and arguing the case for more kidney donations.

John has promoted the SCKPA whenever and wherever he could and has raised funds by appearing as guest speaker at Rotary Clubs, Round Tables and other community groups. He has also pressed the case for kidney patients at meetings with Monitor, the NHS Blood and Transport Service and other bodies.

We mustn’t forget John’s wife, Bobbie. We are delighted to see Bobbie has made it here today. Bobbie has been there constantly, helping John get things done. Just by way of a few examples, Bobbie prepared the fundraising letters we used with Waitrose and the like. It has been Bobbie who has pulled together the flyers that go out with VIVA to announce every meeting. And it has been Bobbie who five minutes after every meeting has emailed me for details of the speaker and subject matter for the next meeting.   Thank you, Bobbie, for everything you have done.

John, we are going to miss you at the helm of the SCKPA. In fact, over the past few months, I have been speaking to members and asking what it is they will miss most of all when you step down. The answer has been unanimous. It’s the jumpers.

So it is my pleasure, on behalf of the SCKPA to present to John and Bobbie a token of our thanks and appreciation for what they have done for us over the last 10 years."