Brief History of the SCKPA

In 1966 Dr Desmond Oliver was given the task of organising and equipping a dialysis unit at the Churchill hospital.The unit was set up as a “Pilot” unit and remained a “Pilot” unit for 9 years. It was a small open experimental ward, initially with four beds and moveable walls, enabling areas to be expanded or reduced, as required. The unit also had a consulting room and an area for renal technicians.

8 August 1967 saw the first patient, Jean Tarver, dialysed in the unit using a Travenol RSP machine. Jean had started her dialysis on PD before HD started. The later Tarver Ward was named after her. At first the unit concentrated on training patients for home dialysis, with the first patient starting home dialysis in March 1968. By the end of 1968 19 patients were dialysing at home, and by the May 1975 this number had grown to 126.

In 1969, at the instigation of Dr Oliver, Harry Thomas, a home HD patient who was later awarded an MBE for his work for kidney patients, set up a self-help group within the dialysis patients to provide support to patients and their families and to raise funds for much needed equipment. It was called the 'Shunt Club'. (A Shunt was the tube that was inserted joining an artery to a vein to provide the access point for dialysis. Later, fistulas became the usual means for HD access.)

From the outset, Dr Oliver was adamant that there should be no paid or professional fund raisers involved. This remains true today. Every penny raised by the association is used for the benefit of patients. The first patients were nursed as in-patients for approximately three months in Ward 1 of the main Churchill Hospital and dialysis took place in the wooden building next to what is now the Tarver Ward. The small dialysis room held four machines, and often three more patients were treated on dialysis machines while they sat on recliner chairs in what is now a photocopier room. In those days patients dialysed for 10 hours. This was reduced to six hours around 1972.

The first Chairman of the association was Dr Oliver. Later Chairpersons included Ruth Lupton, Fred Tring, Allen Newey, Cathy Raff, Molly Bowerman, Bob Price, David Benoliel, Gemma Benoliel and John Champion. In 1970, at the suggestion of Dr Oliver, the 'Shunt Club' set up a holiday dialysis portacabin in Lymington. This was at a time when the availability of holiday dialysis away from home was very limited.

A second holiday dialysis unit was set up in Hereford and a third at St Leonard’s near Bournemouth. More caravans followed later at St Leonard’s. Milford-on-Sea, Goodrington Sands and Durdle Door. The portacabins and caravans were fitted with HD machines and water softeners. If the machines broke down, a technician would be dispatched from Oxford to fix it. 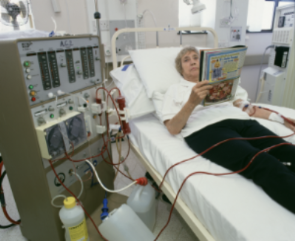 In the early 1970s the 'Shunt Club' changed its name to the Six Counties Artificial Kidney and Transplant Society before becoming the Six Counties Kidney Patients Association in recognition of the six counties from which the Churchill Hospital drew its patients, namely Oxfordshire, Berkshire, Buckinghamshire, Wiltshire and parts of Northamptonshire and Gloucestershire. The SCKPA was registered with the Charities Commission in 1981.

In 1982 the SCKPA bought and converted a mobile static home and shipped it down to Domaine de la Bergerie, Le Beausset, in the South of France where it was fitted with a Cobe dialysis machine. It was used for the first time in March 1983. The association later had a caravan at Cobbs in the New Forest. This provided accommodation for patients using the KC dialysis unit.

Over time holiday dialysis facilities at dialysis centres around the UK, and indeed overseas, became much more readily available and the demand for the SCKPA’s holiday dialysis caravans and portacabins declined. The number of caravans operated by the SCKPA reduced and in 2014 the SCKPA’s last caravan (at Cobbs in the New Forest) was sold. Meanwhile, the 'Pilot' dialysis unit at the Churchill Hospital had been growing. Staff had been using a little caravan next to the unit as a staff room and in 1970 two portakabins had been installed to house secretaries and technicians The stores were in an original World War Two Nissen hut.
In January 1976 a new unit was opened with more space and better facilities (but with the stores still held in the Nissen hut).

In 1975 the Oxford Transplant programme was started under Professor Peter Morris, Nuffield Professor of Surgery, who had come from a renowned transplant unit in Melbourne Australia. The first kidney transplant took place on 30th January 1975 and the second the very next day. With the increasing number of kidney patients being treated at the Churchill Hospital, a new Transplant & Renal Ward was required but there were doubts about the financing. The Patients Association came to the rescue by raising £100,000, a quarter of the cost of the building, in just eighteen months. Building commenced in Spring 1976. It was finished in mid 1977 and was officially opened by Sir Peter Medawar in August 1977, coinciding with the tenth anniversary of the opening of the original Pilot Unit.

In 1978 the SCKPA was one of the fourteen Kidney Patient Associations that got together to help create the National Kidney Federation, a charity which campaigns on behalf of kidney patients nationally. Membership of the SCKPA brings with it membership of the NKF. In the late 1980s to early 1990s the association opened a charity shop in Headington, manned entirely by volunteer patients their families and friends. This brought in much needed income but had to close after a few years.

The SCKPA continues to be run on a voluntary basis by and for the benefit of kidney patients, their family members and carers. It is there to provide advice, help and support to kidney patients, to represent their interests in discussions with local hospital authorities and to campaign for more and better facilities when these are needed