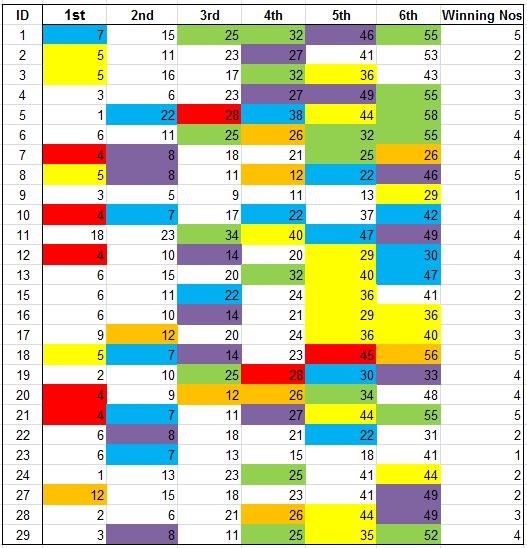 How the SCKPA lottery works:

Each week the six numbers between 1 and 59 drawn in the National Lottery are entered in the grid below and given a unique colour.

Any entrant matching one or more of those six numbers will have that number highlighted in the same colour in their entry.

The Winning Nos column gives the current number of matches for each entrant.

As soon as an entrant has all of their six numbers coloured, i.e. all six numbers have been drawn over a period of time in the National Lottery, the Game is over and the prize fund is split equally between the winner and SCKPA. Should there be more than one winner at the end of the Game, the winners' share of the prize fund is divided equally between them.

Each Game continues for six consecutive weeks.  As soon as a winner(s) is found the Game ends, even if the six weeks have not completed.  The following week a new Game is started. If at the end of six weeks a winner has not been found, 50% of the prize fund is carried over to the start of the new Game.  Should there be no winner after two consecutive carryovers, the next Game will run to a winning conclusion irrespective of the number of weeks.

The stake is £1 per entry per week with entrants choosing to have as many entries as they like. Entrants' names are not displayed on the website, only the entry ID.